Renna Ryann is the newest FTVCash contract star. She contacted me (I think on Twitter) about shooting with me which I was totally thrilled to do. This was the first set that we shot together (though I’m putting it as the second in the Renna Meets Danielle series.) I love Arizona but honestly shooting during the summer is a huge pain. I was sooo sweaty! Renna loved it though, saying that it was way more comfortable compared to the hot and humid Florida (where she lives) summers. There was a water fountain in the office courtyard where we were shooting and the whole time I kept on thinking that it would be a fabulous idea to shoot in the fountain A) because I’ve never done a fountain shoot before and B) it’s water and would probably cool me down. I remember having a member ask me to do a video log in a button shirt like the one I am wearing in this video with all the buttons undone. I figured that if he was requesting that for a video log then you guys would probably appreciate it in an actual update. 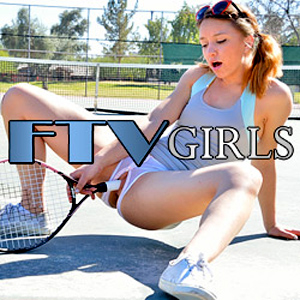